Is There a Difference Between SD, HD, and 4K? 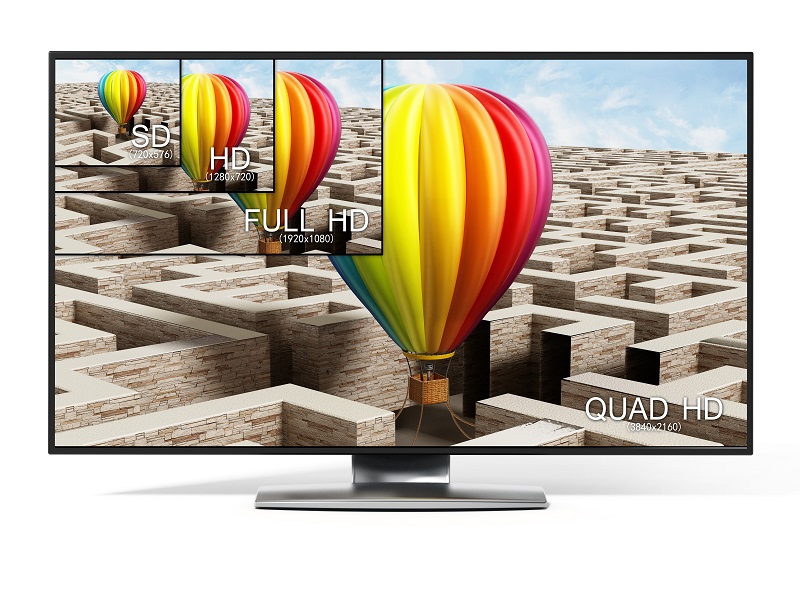 Over the last few decades, the picture quality on our screens has changed dramatically. From the fuzziness of 80s VHS tapes to the incredible crystal clarity of modern-day 4K, we’re continually redefining the viewing experience. Quite literally.

But things change so fast it’s hard to keep up. So, let’s delve into the detail and sketch out the difference between SD, HD, and 4K.

The detail on your screen is measured by the number of pixels – or little dots – that make up an image: More pixels = clearer image.

The more pixels there are, the more detailed the image will be.

Think of the art form known as pointillism. The worst screen definition is like trying to create a pointillism picture using a blunt crayon, while the best is like using a beautiful fine pencil.

The vertical measurement is normally expressed on its own for simplicity. So, 1920 x 1080 is often just called 1080p.

Remember when DVDs first came on the scene and blew everyone away? Well, that was the first time we saw 480p video quality in the home.

While it’s still very commonly used, SD is slowly being replaced by HD and 4K.

One advantage of SD is that SD video files are smaller than HD and 4K files. This means they take up less bandwidth and can be streamed at a smoother rate if you have a slower internet speed. So whether you watch the most recent Stranger Things episode on your TV or check out yet another funny cat video on YouTube on your smartphone, SD resolution will mean you’re using less internet bandwidth compared to HD.

These two formats are sometimes separated by the terms semi-HD (720p) and full-HD (1080p).

Key differences between SD and HD

On a TV or computer screen

Streaming sites, such as Netflix or Amazon Prime Video, offer both SD and HD movies and series, with some HD content often coming at a slightly higher price. If you’ve got a TV that’s at least 32 inches and compatible with 720p and above, you will definitely notice the difference.

The picture quality on HD will be a lot crisper, and will really stand out when watching visually spectacular films or TV series. Watch the David Attenborough documentary Our Planet on Netflix, first in HD then in SD (via the data usage settings), and you’ll notice a major difference.

Whether or not HD makes a difference on smartphones has created the fiercest debate since the ‘milk first or tea first’ controversy (it’s milk first, trust us).

Despite top tech companies claiming that it absolutely does make a difference, many disagree. Here at TechBuddy, we believe that there isn’t much of a difference, at least not for the normal eye.

What is abundantly clear is that streaming an HD movie can drain your battery by 50% and use up a lot of extra data. So, at the moment, watching an HD movie on a smartphone makes little sense when you could watch it in SD.

4K is made up of 3860 x 2160 pixels – the 4K comes from the horizontal pixels almost reaching 4,000. 4K has been around for a few years – Netflix started offering 4K streaming way back in 2014. But only recently has it become more affordable and, therefore, popular.

In 2019, 4K TVs took over 50% of the market share for the first time. Now it has truly hit the mainstream, with 4K TVs dropping to affordable prices and Apple getting involved in 4K streaming.

4K is sometimes referred to as UHD (ultra high definition). Let’s be honest though – ‘4K’ is a lot more high-tech sounding than UHD, which sounds more like long-lasting milk than the latest breakthrough technology.

Not content with the incredible clarity of 4K, the biggest tech developers in the world have doubled their efforts. From 4 to 8. How much sharper can you get?

8K has a 7,680 x 4,320 screen. This promises to offer an astounding level of immersion, with more than four times the level of detail of current 4K screens.

Still, 8K TVs are currently at a price point that makes them exclusively for those with money to burn on new tech toys. And, with no 8K content available, it makes no sense to invest in an 8K TV at the time of writing.

Within a few years though, expect to see the price of 8K TVs drop and streaming services getting on board.

Then, no doubt, 16K will arrive just in time to spoil the pixel party.

Need help picking the right TV for you?  Book a TechBuddy today and receive expert advice based on your needs.